Anyone familiar with rugby recognizes that the name of my company, Number 8 Rugby Shirts, honors the roots of the game.

Number 8 Rugby Shirts gets its name directly from the pitch. 15 positions make up one team in rugby, and each position has a corresponding mandatory number. The numbers start low, giving the biggest men, the hulking forwards, the lowest numbers 1 – 8. And go up in order giving the smallest men, the nimble backs, the highest numbers 9 – 15.

All of the positions have names, from the Loosehead Prop who wears number 1 to the Fullback who wears 15. All the positions except the number 8. He is simply, the 8 Man, or Number 8. The connection between the two halves of the team, the 8 Man must be a versatile player capable of tackling like a forward and carrying the ball like a back. Number 8 must be aggressive, and make his presence felt all over the pitch.

In my research – and this is the fun part – I discovered that in numerology, 8 represents prosperity and good will. How auspicious! My idea was that calling it Number 8 would honor the roots of rugby.

“A knitted pullover sport shirt usually in bold horizontal stripes and having a white collar and neckline placket, styled after the shirts traditionally worn by the members of rugby teams.” 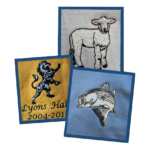 If you can think it up,
we can design it!